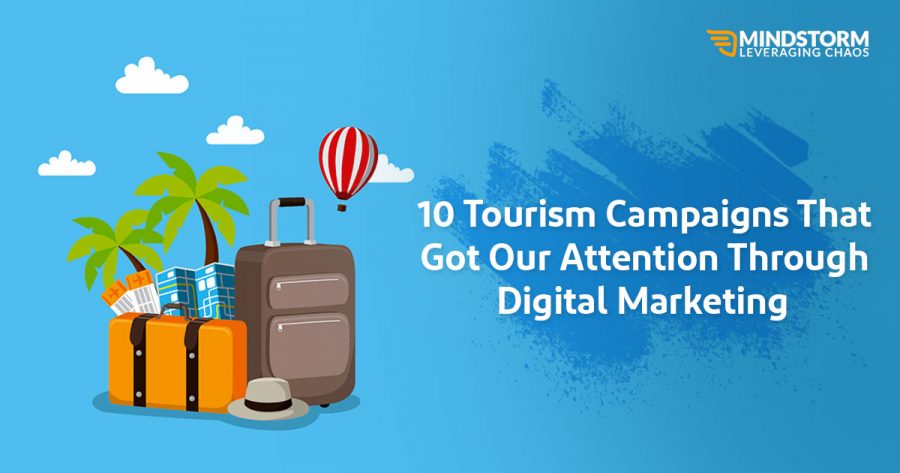 What do you expect from a marketing campaign planned by a tourism board or a digital marketing agency? If it’s images or video clips of beautiful scenery, thrilling activities, mouth-watering dishes, then you’ve got to raise your bar of expectations. With the tourism industry booming all year round, pitching a marketing campaign that catches attention has become a competition these days. Tourism marketing campaigns today are more than just fascinating videos. They have a theme, a story line, something new to allure you with, to their country.

While there are in numerous such campaigns, we have enlisted below, 10 best campaigns by tourism boards from all over the world.

The best approach a marketing campaign or a digital marketing agency can take is the emotional approach. That’s exactly what Ireland’s tourism board picked with ‘Fill Your Heart’. In the year 2018 they posted a video that captured how some destinations in Ireland can make you feel. The video covers a couple’s journey who are touring around Ireland. For the campaign they have been requested to wear a technical gear that measures their heartbeats and a camera to capture their whereabouts.

The objective of the video is to show how happily your heart reacts to the various destinations of Ireland. It was as an indirect way of inviting the audience to come and feel the bliss themselves. Watch how your heart would react to the beauty of Ireland!

2. Norway- Sheep With A View

This 2018 tourism campaign by Norway’s tourism board revolved around their law passed in 1957, by the name- “The right to roam”. The term can be literally translated to ‘the right to roam’ and it was portrayed with the help of sheep. Five of Norway’s finest sheep were picked, fitted with GoPros and left to roam on their own. Eventually giving the audience a Sheep’s Eye View of Norway.
The campaign was a quirky take on the regular way of showing the audience around the beautiful country and the people’s lifestyle there. Watch the Norwegian sheep’s journey.

The tourism board of Australia took their campaign to a new level. They not only just creating an appealing visual, but also introducing it at a splendid time, during the Super Bowl. The video starred big names for the audience. To promote Australia, the tourism board goal-ed an advertising spot during a Super Bowl match and hence grabbed many eye-balls.
With this campaign, the Australian tourism board proved how timing is also an important factor for the success of a marketing campaign. A digital marketing agency knows the recipe for a successful campaign.

To promote their tourism, Sweden’s tourism board leveraged their quote, “365 days a year, accommodate everyone, has unlimited beds” and check-in is available “whenever.” For this they collaborated in the popular lodging and tourism promotional brand AirBNB who backed their quote as an indirect testimonial.
For their campaign, Sweden’s tourism board took the statistical approach to showcase their popularity and create a FOMO among the audience. A digital marketing agency can help do wonders.

For their marketing campaign, South Africa’s tourism board planned to divert the attention of their tourists from safari, to other attractions in South Africa. For this, they came up with the idea of a visually interactive microsite called “24 Hours of Wow”. It featured 144 six-second video clips, each representing an activity or attraction, hence showcasing the other destinations of the land.
While the campaign may sound like trying to divert the attention from safari tours, but the board clearly aimed only at promoting other destinations.

For their campaign in 2016, Ireland utilised the popular Tv Series- Game of Thrones to their advantage. As a major part of the series was shot in Northern Ireland, particularly at the famous Dark Hedges trail, Ireland took up the opportunity. With an exclusive partnership with Game of Thrones, they created the campaign, ‘Doors of Thrones’. In the campaign, each door was matching a specific episode in the upcoming season. The communication was to visit Ireland and the places where their favourite series was shot.
This was an attempt by the Ireland tourism board to directly catch the attention of the youth using something that they can relate to.

Las Vegas is known for its lively ambiance and the free-spirited vibe that it showcases. For its marketing campaign in 2018, the tourism board took up an emotional approach. By showing the freedom of love and eventually promoting Vegas as an LGBTQ friendly land.
Watch their video featuring the story of two women who meet and fall in love in Vegas.

For their tourism campaign, Quebec tourism board featured a blind tourist who can tell how the destinations felt. They aimed at “do more than just see a place, feel it.”. That must have been a digital marketing agency’s mind.

What better a campaign than showcasing real experiences by real tourists? This is what Pittsburgh promoted- real stories, real emotions and real experiences, thus making their campaign relatable. For their campaign, instead of a video, they took to posting it all on their Instagram page – @visitpittsburgh.
This can be a work of a digital marketing agency.

In 2018, Hong Kong tourism board partnered with sky100 and VR experience design house TimeLooper to launch a VR based interactive microfilms tourism campaign. The campaign was named- “VR Time Travel: Step into Old Hong Kong” and showcased the life of old Hong Kong. With this campaign, the tourism board invited tourists to visit Hong Kong and see how different and developed Hong Kong is now.

A marketing campaign is the best way to reach out to your audience and promote your brand. For tourism brands, there’s no better way than showcasing what beauty the land beholds for the tourists. What differs, is the portrayal of the same.

Mindstorm is a ‘Hybrid’ Digital Marketing Agency in Mumbai that aims to connect with its target audience with innovative and outstanding digital campaigns. With every campaign, we address something new and set new benchmarks. Our team has expertise in boosting the social media presence of the brand and building the right kind of buzz in the target audience.   Through all these services, Mindstorm empowers brands with real-time and personified creative communications to effectively target social media marketing goals. Also make the brand reach new heights. We are great at strategic digital marketing.