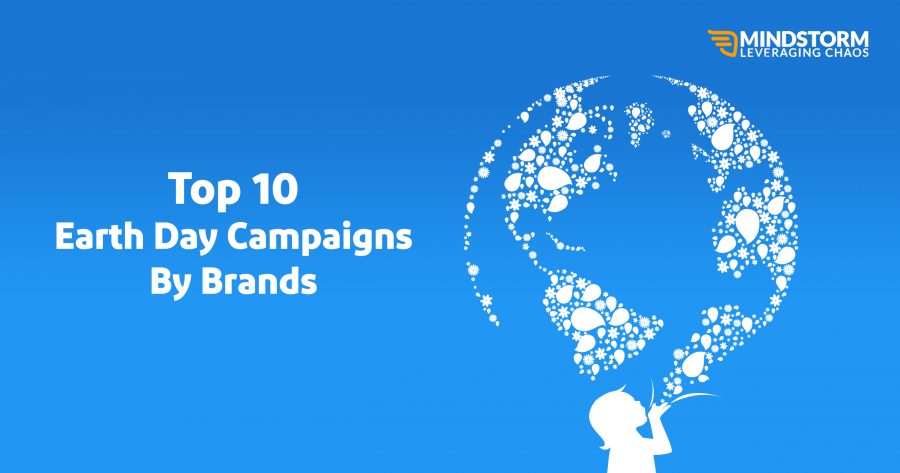 Greta Thunberg is synonymous with climate change, she gave many around the world a reason to think about the melting ice caps. The earth is big however, very big, sprawled with innumerable flora & fauna each surviving and thriving in their environments. Earth Day is our chance to not just care about the climate, but all life who share this planet with us.

Here are some of the most notable initiatives by brand to spread awareness on Earth Day in 2019.

To celebrate the intensity, color, and vibrancy of our world, Apple showcased an enthralling video titled ‘Don’t Mess With Mother,’ an action-packed ode to the globe and it’s diverse flora & fauna on Earth Day.  The raw unbridled intensity of Mother Nature is shown in up-close action with jaw dropping visceral scenes one couldn’t believe were shot on just an iPhone.

2. New York Times : The Truth is worth it

A brilliantly showcased 30 second clip by the New York Times exhibited the reporting process that led to their groundbreaking investigation into the impacts of warming seas on the Galápagos Islands. The video is thought provoking and instantly makes one contemplate a very serious question, how did we let this come to pass? This ad campaign went up on air and  streamed on television as well as social channels.

With over 100 million downloads, Pokemon GO is one of the most popular apps out there. Although it is not as popular as it was when first launched, the app still has over 20 million daily users. For Earth Day, special in app rewards were created for users who attended local cleanup events. The rewards were so popular that they were extended till April 30th.

In celebration of Earth Day, a brand that produces light beer, Michelob Ultra Pure Gold took an unusual approach against disruptive banner ads with the launch of its own ad blocker to replace ads with viscerally stunning photos of nature. When users clicked the nature photos they were automatically redirected to a site for a nearby park, encouraging the users to go out and truly enjoy nature. A fine initiative indeed!

In honor of Earth Day, we’re spotlighting 5 birds this week with a Limited Edition shoe – and all proceeds from this collection will be donated to the @audubonsociety! First up is the Painted Redstart – learn more & get your pair at https://t.co/urnfaO83NR #weareallbirds pic.twitter.com/UQgiWoz38T

To promote their Earth Day shoe collection, the shoe company Allbirds teamed up with the National Audubon Society to showcase five birds whose existence is threatened by climate change. All of the proceeds from Allbirds’ final Earth Day Collection shoe went to the @audubonsociety. To showcase the urgency of protecting species in a unique way was a stellar that was executed perfectly.

6. FCB Art Group : Maybe this is our last chance?

Unilever beauty brand Pure Line enlisted FCB Artgroup to find a way to celebrate the brand’s responsible attitude to nature and caring for the natural beauty of women for Earth Day.In a spot that smartly blended Mother’s Day and Earth Day, the agency asked women the question, “If today were the last day to say something to your mother, what would you say to her?”They then asked the same question, but for Mother Earth.The result was a touching, surprising and emotional video that reflected Pure Line’s commitment to taking care of nature and the environment. Kudos for a well thought out campaign!

Sambazon, an acai manufacturing brand kickstarted their second annual #PurpleForThePlanet campaign in 2019. The campaign reinforced the company’s commitment to protecting the environment and its rich biodiversity by saving 30 species in 30 days, one purple head at a time. Last year’s campaign far surpassed its goal.

Launched on Earth Day, the #PurpleForThePlanet challenged the public to color their hair purple and share their support for the cause on social media before the end of the campaign on World Biodiversity Day (May 22). For every person who participated, Sambazon would purchase five acres of rainforest through Rainforest Trust’s Conservation Action Fund.

8.The North Face : Earth Day Should be a holiday

To send across a strong message on World Earth Day, a clothing company, the North Face partnered with musicians, artists and culinary influencers to host a series of one-of-a-kind experiences that encouraged people to disconnect digitally & then engage with their natural surroundings.

Their initiative saw The North Face & 15 other organisations around the world partnering to launch a global Change.org petition to make Earth Day an officially recognized holiday. The North Face also shut down 113 stores in the US & Canada for the duration of this event to provide opportunity for employees to disconnect and explore. Practising what you preach, The North Face got it right!

Each year 100,000 marine mammals and turtles are killed by marine pollution and reportedly, 90 percent of seabirds have plastic in their stomachs. Yet 8 million metric tons of plastic pollution still enter the world’s oceans every year. To bring this matter to center stage Wieden + Kennedy, an advertising company took the creative way forward with their 1 minute long stop motion animation. The video uses washed-up marine plastic waste to assemble a robot-like fish that is almost gobbled by an opportunistic seagull. Want to know what happens next? See the video!

A brand that produces beer brewed especially for the great outdoors, Busch created something quite unique for its enduring partnership with the National Forest Foundation for Earth Day 2019.

The brand introduced Rooted In Love, a premium hard-cover coffee table book made from FSC Certified recycled paper. The book was curated to raise funds for The National Forest Foundation with each page honouring a tree across America with a heartfelt (and quite humorous) love letter from Busch. Simply adorable yet highly effective!

Enjoyed seeing the creativity of brands around the world? They sure give one something to think about, don’t they? We hope you’re eagerly looking forward to what brands do in 2020.
Follow our blog here to stay updated or browse through a more exciting list of campaigns.