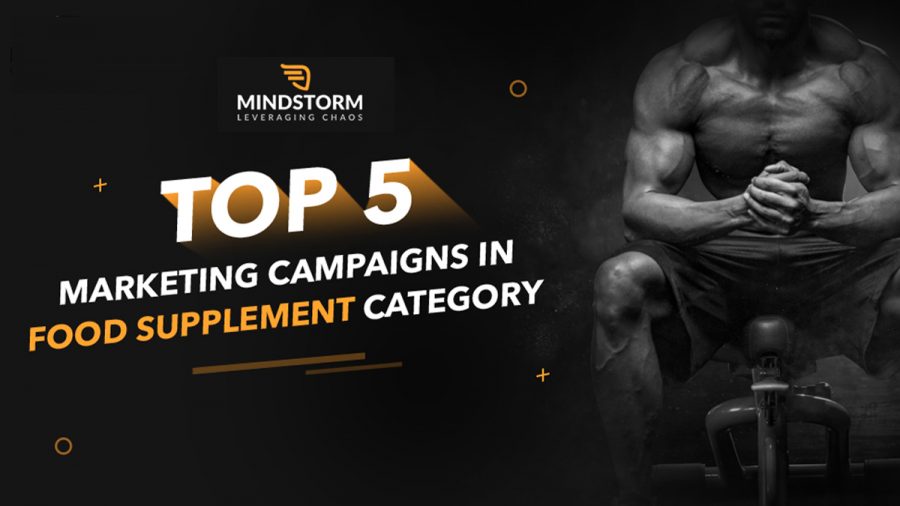 Nothing replaces a good diet, we know that already.
Then again, where do we go to supplement the nutrient needs that our diet can’t provide? food supplements, naturally!
There’s a whole lot of them to choose from in the market these days. Let’s take a look at some of the stellar marketing campaigns conducted by a few of these food supplement brands.

If you’ve been to a gym, say ever, you’ve probably heard about MuscleBlaze. It is a well known sports nutrition brand from India that provides supplements for weight gain/loss and muscle synthesis. With a bold ambition to target Rs.1,200 crore protein supplement market in India, MuscleBlaze came up with two incredible marketing campaigns over the course of one year. They were
A) #TumNahiSamjhoge (You Won’t Understand)
B) #ZiddiHoonMain (I’m Stubborn)

The campaign showcased the discipline and dedication of  dedicated fitness nuts while brilliantly showcasing the fact that they don’t expect the rest of the world to understand why they’re so driven. The campaign released a 2 minute long film on YouTube which garnered more than 5 million views! A 30-second video advertisement was also created for TV. The campaign received over 9,000 images on their site in just 3 weeks and over 4,000 videos were generated on YouTube.

After the tremendous success of their first campaign, MuscleBlaze knew all too well that their second campaign had to deliver. Spoiler alert; It did!


Protinex, one of India’s leading nutrition brands launched its integrated marketing campaign #SomethingMissing in 2016. The campaign was aimed at creating awareness of protein inadequacy in Indian diets and busting the myth that regular diet is all one needs to supplement their protein needs.

The #SomethingMissing campaign kicked off with a simple question for the Indian masses ‘Could there be #SomethingMissing in your daily diet?’ This messaging has been carried out across multiple consumer avenues like television, digital and experiential activation. #SomethingMissing entranced viewers with unique media innovation and multiple silent ad spots.

The ‘’#SomethingMissing” initiative has been able to amplify engagements across TV, Digital, On-Ground and Radio in a truly innovative manner.

MyProtein, a Whey brand owned by The Hut Group is a great example of how a brand can use marketing techniques to not only improve customer experience but to increase average purchase frequency. MyProtein optimizes their use of email marketing and its e-commerce to make efficient use of screen time for their messaging.

MyProtein uses
A) Cross-selling tactics by having related products shown at every product page on their website.

B) Up-selling to entice a customer to buy more by providing value in bulk.
C) Email marketing strategy used by MyProtein does not waste the opportunity to remind you about things you have left on your shopping cart.


Next up on the list is Horlicks, the idea behind their marketing campaign ‘#RiseUp’ was simple yet profound. At any given time, 1 in every 5 people feel unusually tired and 1 in 10 have prolonged fatigue, state reliable statistics online when searched how common is tiredness. The reason for feeling tired often can be anything including an ample amount of work or peer pressure or simply, aging.

Horlicks Protein Plus set out to generate awareness about muscle health among consumers who are above the range of 30 years of age. The brand created a digital campaign called #RiseUpChallenge specifically aimed at spreading awareness about muscle health deterioration. The campaign was amplified on social media platforms using the #RiseUpChallenge, which evoked interest from various influencers who attempted the challenge and further nominated social influencers like Sumeet Vyas, Aparshakti Khurana, Shifa Merchant, Viraj Ghelani among many others, to assess their muscle health.


The pressure faced by students in India to perform well is hardly breaking news. However, this issue gets far less attention than it deserves. The psychological impact such pressures have on young minds have a lasting effect, sometimes ending in saddening turn of events. Taking forward the thought of ‘Look Beyond Marks’, Bournvita wanted to encourage a progressive parenting stance and put across the message that marks alone don’t define the future of kids.

To act upon this idea a 3 minute long video was released which showcased different families gathered at a store. The twist was simple, not to give them the clothing item of their choice but to instead suggest something entirely different onto them and push them to buy it. This was understandably upsetting for the adults until the message behind the stunt was revealed to them. ‘If having their opinion valued is so important to them, why don’t they do the same for children?’

The profound impact of this subtle message left the parents reeling in surprise. It helped them gain a bit more understanding of the pressures their brave children face quietly everyday.

This was our list of some of the most thought provoking marketing campaigns that brands across the food supplement sector have conducted. Some have been purely for sales related purposes while some others tried to strike a deeper chord with the society at large. Whatever their reasoning, the execution behind each brand was quite innovative and helped them garner well deserved success.
If you’re looking for ways to help your brand bite into some of that success,
reach out to us here.
We’ll be happy to help!